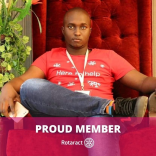 Rotary Ethiopia, RE, has now been registered and certified by the Agency for Civil Society Organisations of Ethiopia under the new proclamation #1113/2019 that repealed the former deterrent one.

This is certainly heartening news and a glorious moment for our District 9212!

Operationally, there will be a board which is the executive branch.  The chair of the board will be the chair of Rotary Ethiopia and will preside over the General Assembly.  In its constitution, the charter chair of the entity is Past District Governor Teshome Kebede Redie.

In application, everything remains the same as it has always been.  The role of the Rotary Ethiopia is more in the area of complying to local requirements, particularly in the area of financial management, transparency and accountability which are consistent with RI requirements.

Apply to serve on a Rotary International Committee

This tremendous achievement will open up the cork which had bottled up potentials of forming Rotary clubs in Ethiopia.  We will soon see applications from all over the country in unprecedented proportions.

With ELEVATION Comes a New Rotaract